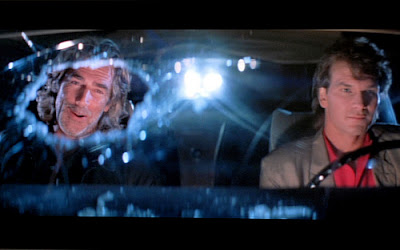 The 1989 movie “Road House” is a rip-roaring action comedy that took me 28 years to see.

Dalton, played by Patrick Swayze, the coolest, toughest bar bouncer in the country is hired to come to a small town and clean up the roughest dive in the burg. Liking the challenge, as well as the big bucks that go along with the job, Dalton sets out to kick ass. And he does, although it takes him half the movie to whup all the dirtbags, and to teach the bouncers and bartenders how to do the same, with style.

Dalton takes his lumps along the way, and when he can’t administer first aid to himself, he is forced to go the hospital, where he meets a beautiful young doctor, played by Kelly Lynch, and – well, you are way ahead of me.

The biggest problem in the town is a rich gangster named Wesley, who is running a protection racket and collecting from all the honest businessmen. Wesley is played with zeal by the great Ben Gazzara, who all but steals the show from Swayze.

Just when Wesley and his goons step up their strong-arm methods, Dalton’s old mentor, Wade, played by Sam Elliott, rides into town to help. Elliott is another actor who nearly steals the show from Swayze. But Swayze persists, taking on the gang, including a one-on-one martial arts showdown with Wesley’s top henchman, and finally Wesley himself.

This film was directed by Rowdy Herrington, who made a handful of action and crime films over the years, along with an interesting movie about pro golfer Bobby Jones. “Road House” was produced by Joel Silver who made tons of action films since the late 1970s.
Posted by Elgin Bleecker at 1:17 PM
Labels: Ben Gazzara, Joel Silver, Kelly Lynch, Patrick Swayze, Rowdy Herrington, Sam Elliot